Tempelhof Airport is to become a future-oriented meeting and exchange place serving the public interest for Berlin, Germany and the whole world. A city within a city, colourful and diverse with art, culture, creative industries, public uses, and major events.

Interesting facts about the building:

The monumental terminal reflected the preferred self-representation of the German state at the time it was built, while the modern architecture on the air side emphasizes the engineering structure. But it's not just the size that impresses. Since its inception, the airport has been the setting and backdrop for important historical events in Germany that reflect the history of the 20th century. The place is just as inseparable from the history of flight as it is from the horrors of the Cold War and the great solidarity shown during the 1947-48 Berlin Airlift. No project of this magnitude with its symbolism as a gateway to the world is as emotionally close to people as THF.

Development of the district

The development of the former airport into a district for art, culture, creative industries, and public uses is a generational project. Especially since the building was never fully completed and parts are still under construction today. Inadequate construction at the time the airport was built and especially after the start of the war, as well as inadequate maintenance, had left the now-listed in poor condition after it closed.

Tempelhof Projekt GmbH has been developing the airport since 2011. After an initial focus on the development of Tempelhofer Feld (the former tarmac) and major events at the airport, as well as the use of the airport as emergency accommodation for refugees, the necessary fundamentals are now being addressed so that the building can be fully restored in the coming decades for a new use.

The opening projects funded by the federal and state governments, Kopfbau West with Tower THF, the history gallery and the newly opened CHECK-IN Visitor Center, which will make the location more accessible to visitors in the coming years, will be on hand to support this long journey.

The internationally sought-after event location already offers visitors from all over the world a stage for extraordinary events such as the Neonyt fashion fair, the Velo bicycle fair, and the Formula-E racing event.

Even if the building needs a complete renovation, a good 80 companies and institutions now have their offices and commercial space in the airport building, including designers, musicians, digital agencies, game developers, and even the Berlin police.

Public tours are offered daily where guides explain the eventful history of this special place and provide insights into the many interesting areas. 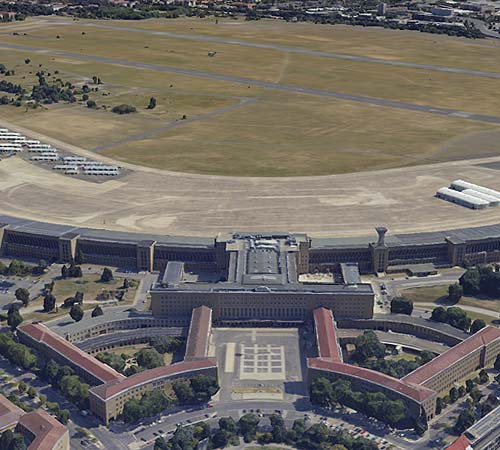 Use our interactive map to find out more about the location of Tempelhof Airport and its infrastructure - available in 2D or 3D. 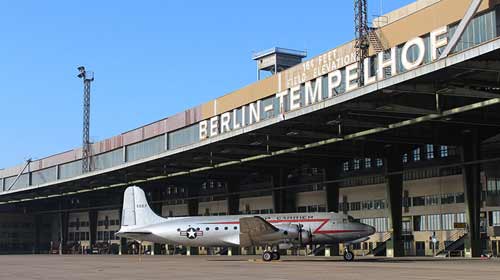