As a polycentric city, Berlin offers the advantage that in addition to the three central locations of Mitte, City-West and Potsdamer Platz, other office locations exist or are being created.

In the PricewaterhouseCoopers (PwC) ranking of the most attractive locations for real estate investors in Europe Berlin is ranked second. The ranking is part of the study “Emerging Trends in Real Estate: Europe 2022 – Road to Recovery", for which 844 decision-makers from real estate companies, investment managers and other industry experts in Europe were surveyed. Among other things, the future prospects of the cities compared in terms of investment and development are taken into account. According to PwC, Berlin is particularly attractive for foreign investors, not least because of the robust German economy. Compared to London and Paris, Berlin benefited from the short commute times to the city center – an aspect that became particularly important during the pandemic.

The Berlin Economy Overview Map provides specific industry and infrastructure information for any location in Berlin. 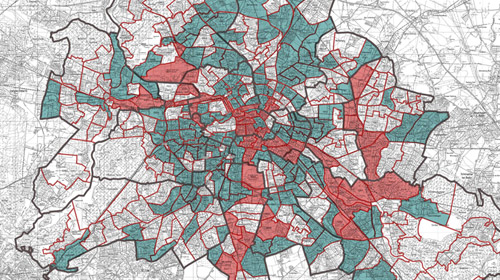 Use the GRW-Map of Berlin’s support regions to determine which subsidy rates apply to your company.