With the highest gross national product and one of the largest populations in the EU, Germany is the single most important market in Europe, and thus the number one location for investment by international companies.

The new BER airport has created a new European hub for air travel in Germany. The commercial area around the airport, the Airport Region Berlin Brandenburg, offers companies a wide range of location benefits.

The Airport Region Berlin Brandenburg has great connections in all possible directions. For example, trade with Asia in the renewable energy sector, the car industry and the semi-conductor manufacturing area are becoming increasingly important. In these industries, the Airport Region Berlin Brandenburg is a high-tech location and with the new BER airport, it offers numerous benefits for the Asian market, such as shorter flight times to Asia compared to Paris and London.

The airport region also offers a smaller burden with respect to taxes and social security costs in comparison to similar regions in France, Italy, Poland and the Netherlands – as well as in comparison to other similar locations within Germany itself.

The region is home to the decision-making centers of major companies as well as a number of important medium-size companies. Here, you’ll find cooperation partners for research, development, production, sales and distribution.

The region‘s attractive financing opportunities mean that large-scale companies are eligible for subsidies of 30% – with small-scale companies even receiving up to 50%. One particular focus of this funding lies on the support of R&D projects.

Roughly 600 annual trade fairs and congresses with a total of more than 1.8 million visitors make Berlin Germany’s number one city for conferences.

The labour market in the Airport Region Berlin Brandenburg benefits from the advantages of an attractive, innovative catchment area with a population of around six million people.

In the Airport Region Berlin Brandenburg you will find the right location for your company: whether you’re looking for a modern, equipped office or commercial space in a premium location, a logistics area with excellent transport links, or a company head office in one of the innovative technology centres - for every requirement from setting up your very first representation, all the way to a corporate head office.

You can find more information about the 34 commercial locations in the Airport Region here.

With the largest, most modern communications network in Germany, and the most comprehensive fibre optic network in Europe, Berlin Brandenburg is a major location for large telecommunication and internet service providers.

City living and pristine nature nearby, as well as a variety of cultural options create an unrivalled quality of life in the Airport Region Berlin Brandenburg. Commercial locations in the Airport Region 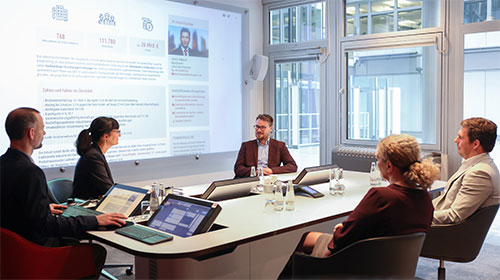 We advise you in creating tailored concepts for subsidies, lend support with other economic development assistance and help you search for centrally-located real estate and qualified personnel.